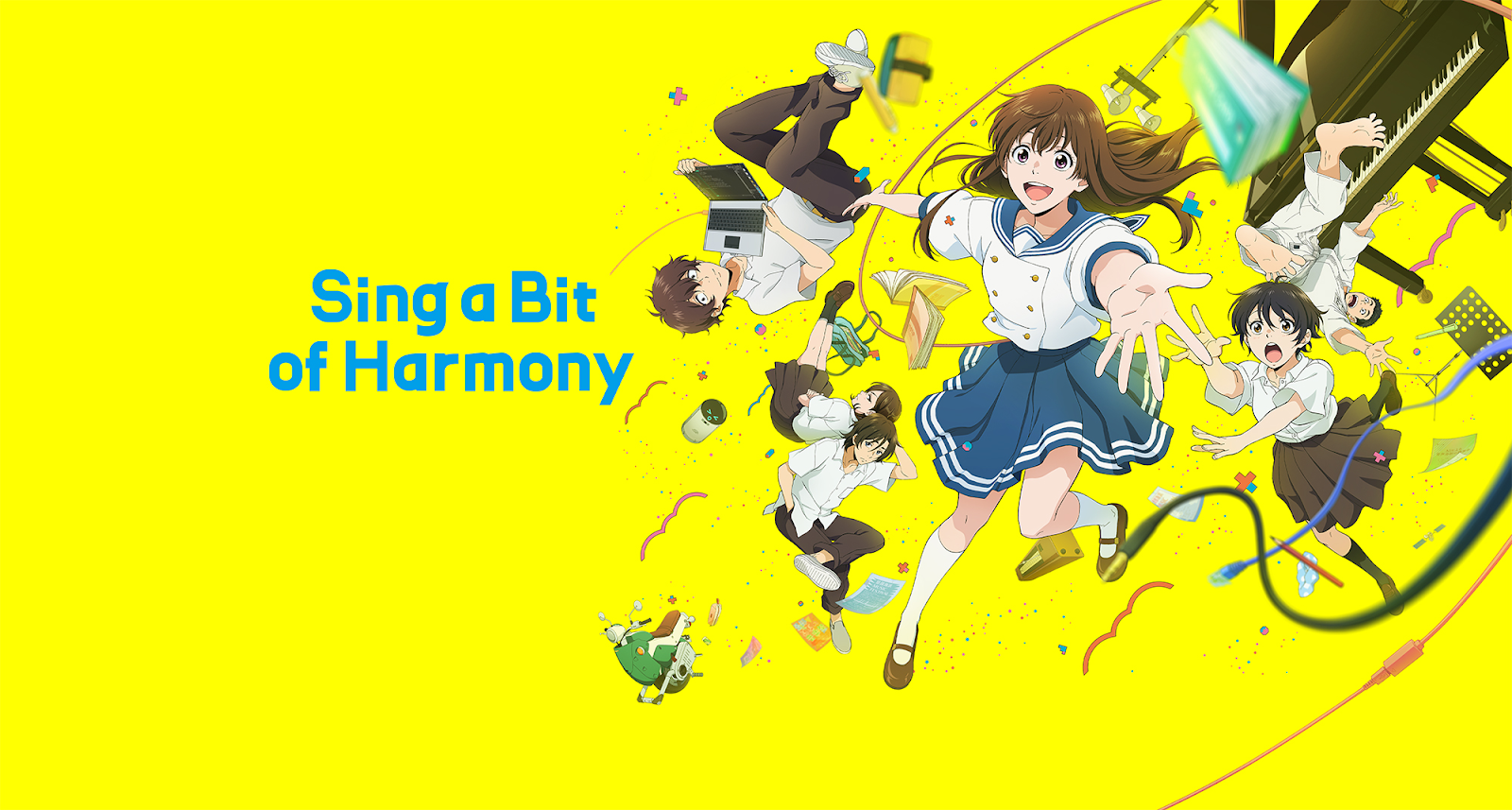 Sing a Bit of Harmony is a movie I couldn’t catch in theaters, which is unfortunate considering some of its stunning visuals. I also think I would’ve connected with the emotional moments more if I had seen them on the big screen. As it is, J.C. Staff and Yasuhiro Yoshiura have created an enjoyable if shallow movie. Although the songs are nowhere near as interesting as Belle’s soundtrack and its themes are half-baked, the movie is charming and tries to tackle interesting questions about our ability as humans to connect with AI and robots.

The story focuses on a young girl named Satomi, an independent loner at her school who’s mostly ignored by her classmates and her mother, an AI developer. One day, her mother’s project, an AI named Shion, joins her class with a song and a mission to make her happy. As Shion searches for ways to make her human friend smile, she brings Satomi closer to four other classmates. However human Shion appears to these friends though, she is seen by the rest of the world as just a piece of machinery and the kids are soon reminded of this cruel reality.

[Editor’s Note: Please assume from this point forward that everything–quotes, images, and summaries–in this post, unless cited otherwise, comes directly from Sing a Bit of Harmony (2021). This post also goes into in-depth spoilers for the movie. Thank you.] 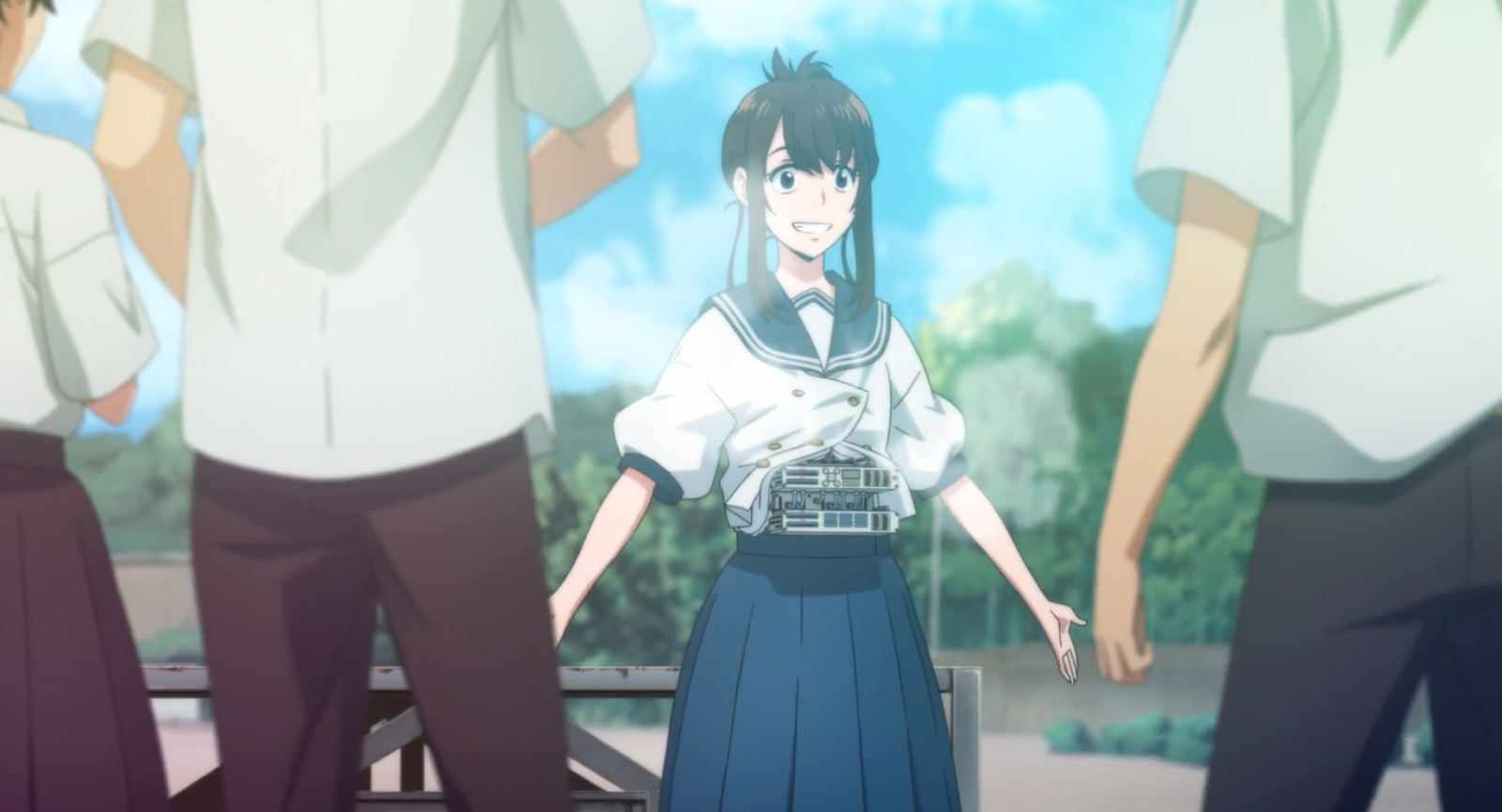 Out of all the characters in Sing a Bit of Harmony, Shion stands out in terms of development, design, and her role in the movie. The design of Shion to appear human, but very visibly a robot when she breaks down–seen in her hardware ejecting itself from her stomach–is great. The portrayal of Shion is also done well in that she has an energetic and happy-go-lucky personality. I found her friendships with other AI adorable and funny, and it also serves to raise questions about sentience and humanity’s treatment of them.

The world of Sing a Bit of Harmony is obviously more advanced than ours yet remains grounded in mostly mundane aesthetics. While the bus may drive itself and robots farm instead of humans, I like the decision to juxtapose these technological advances within a rural environment. In this way, the movie reminds me of one of my favorite anime, Time of Eve, which also depicts the ways in which humans fear AI. 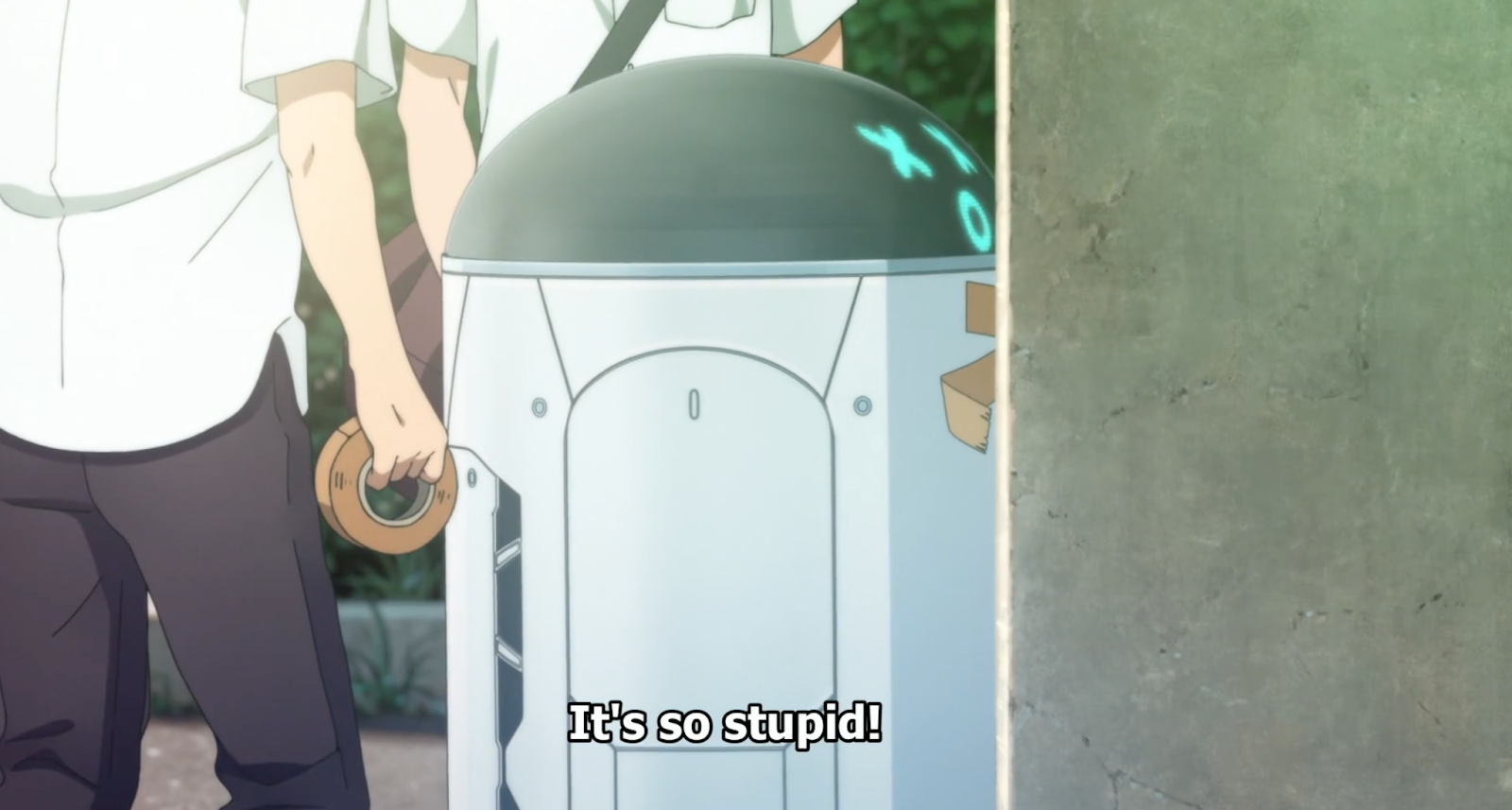 The AI are used to clean, farm, and even to practice sports with, but any sign of them malfunctioning or breaking down is seen as annoying or, at its worst, scary. Some people even go out of their way to mess with them since they’re not human so they make a convenient target for bored kids. There’s also a sense of resentment towards AI, which is just misdirected resentment towards Hoshima, the big tech company that has overtaken the town.

Rather than AI being a problem, the problem is how corporations abuse AI and technology in general. After Shion is taken back by Hoshima after spending too much time with Satomi, students at the school talk about how all of their phones were searched. The developers at Hoshima are terrified of Shion’s independence, but have no problem utilizing her powers and other technology for themselves.

Sing a Bit of Harmony also depicts the frustrations of kids and younger generations with adults. The people at Hoshima who developed Shion don’t care about her or see her as something that deserves rights or has thoughts and feelings. At one point, Satomi asks her mother, a scientist who works at Hoshima, whether AI can want to make people happy. Her mother replies that it depends on whether the AI was given as an order and is generally uninterested in this question. When Satomi’s new friends are singing to Satomi near the turbines, Shion is subdued by the company and the kids are given the warning that “She belongs to us.” There’s this beautiful shot of Shion reaching for the moon and trying to grasp it as she falls and is taken away. It captures her character perfectly, her simply desire to be free and to perhaps grasp her own happiness, and being denied it.

The kids are the ones who spend time with Shion, whom she tries to make happy, so it’s no wonder that they empathize and start seeing her as more than a machine that does what they want. For all intents and purposes, she becomes their friend. Satomi tells the adults, “She’s not an object!” and the adults double down on the idea that children can’t have fully formed opinions and shouldn’t interfere in adults’ work.

Even Satomi’s mother, the only possible “good” grownup in the movie, sees Shion as an object. When she’s taken off the project for not watching Shion properly, Satomi’s mother is frustrated that she’s lost her standing in the company rather than concerned. She also blames her daughter for not telling her about Shion. While she comes around in the end to help the kids, this was an interesting moment to consider as it paints her in a rather selfish light.

While this conflict between kids and adults really resonated with me, the characters themselves mostly did not. Their group dynamic felt shallow and there was no reasonable progression of time to show us how they became friends. This isn’t like Anohana, where the characters are childhood friends with previously established connections, so it was pretty jarring. There are also small conflicts with each character that are meant to make us care about them, but it just made me feel like the movie was wasting its time. For example, there’s a romance between two characters that was resolved fairly easily, but it told us very little about those involved and their feelings for one another.

The music is also nothing to write home about. Shion “fixes” the humans’ problems with music, but the songs themselves don’t further the story or hit emotionally since they’re not coming from the character feeling that emotion. Shion sings a song about how much Satomi wants friends, a song about romantic feelings, a song about succeeding in judo, etc. They all blend together.

Halfway through Sing a Bit of Harmony, the friends sing a song together. At this point, they still haven’t truly bonded or become friends so this came out of nowhere. It was sweet and one of the most emotionally impactful moments of the movie, but didn’t make a lot of sense. In my opinion, music should really add to a movie, especially if characters are singing. This aspect of the movie, combined with the ending, made it less fun than it could’ve been. It’s eventually revealed that Shion was programmed by Touma as a child with the directive to make Satomi happy and “ran away” when she was about to be erased by a Hoshima programmer. Shion’s ability to sing was given to her by Satomi, who loved singing as a child. We watch a montage of Shion observing Satomi grow up and being unable to make her happy until she lands in the current body she has now. Seeing the level of care, even if programmed, that Shion has for Satomi is wonderful. Especially considering how no one else really cares for Satomi (even her love interest, Touma) or tries to make her happy in tangible ways. Satomi’s mother notes the repercussions of this revelation that AIs are able to evolve because of what it means for how they perceive and treat AI.

However, it never feels like Shion gets the development she deserves. After all, her wish to make Satomi happy is Touma’s wish and she dies after fulfilling it, unable to find some goal or meaning for herself. This conclusion disappointed me because the entire point of the movie is to find humanity in what humans consider nonhuman yet Shion is, in the end, relegated to one order: make Satomi happy. Touma later says that it couldn’t have been just the order and Shion probably wanted to make Satomi happy of the AI’s own volition, but this is a little confusing.

While it’s true that Shion probably could’ve gone against the order, it doesn’t change the fact that that’s all we see her working towards in the entire movie. If more time had been given to Shion going against this for a bit or deciding on her own to make Satomi happy, it would’ve felt more powerful.

Another thing I didn’t like about the ending is Hoshima getting off clean. The town still uses their technology, Satomi’s mother returns to work for them (with the same guy who wanted to see her fail so badly too!), and there’s no semblance that the loss of Shion or discovery of them invading people’s privacy has made them lose money or affected them in any way. While this may work as a commentary on the power of big tech in a more serious film, it doesn’t work here.

Overall, Sing a Bit of Harmony is a movie that shines at times with visually stunning shots, reflections on AI, and a sometimes-moving depiction of friendship that transcends barriers. It’s a nice movie to watch if you want something cheerful, but don’t expect it to interrogate its themes too much or make you tear up.